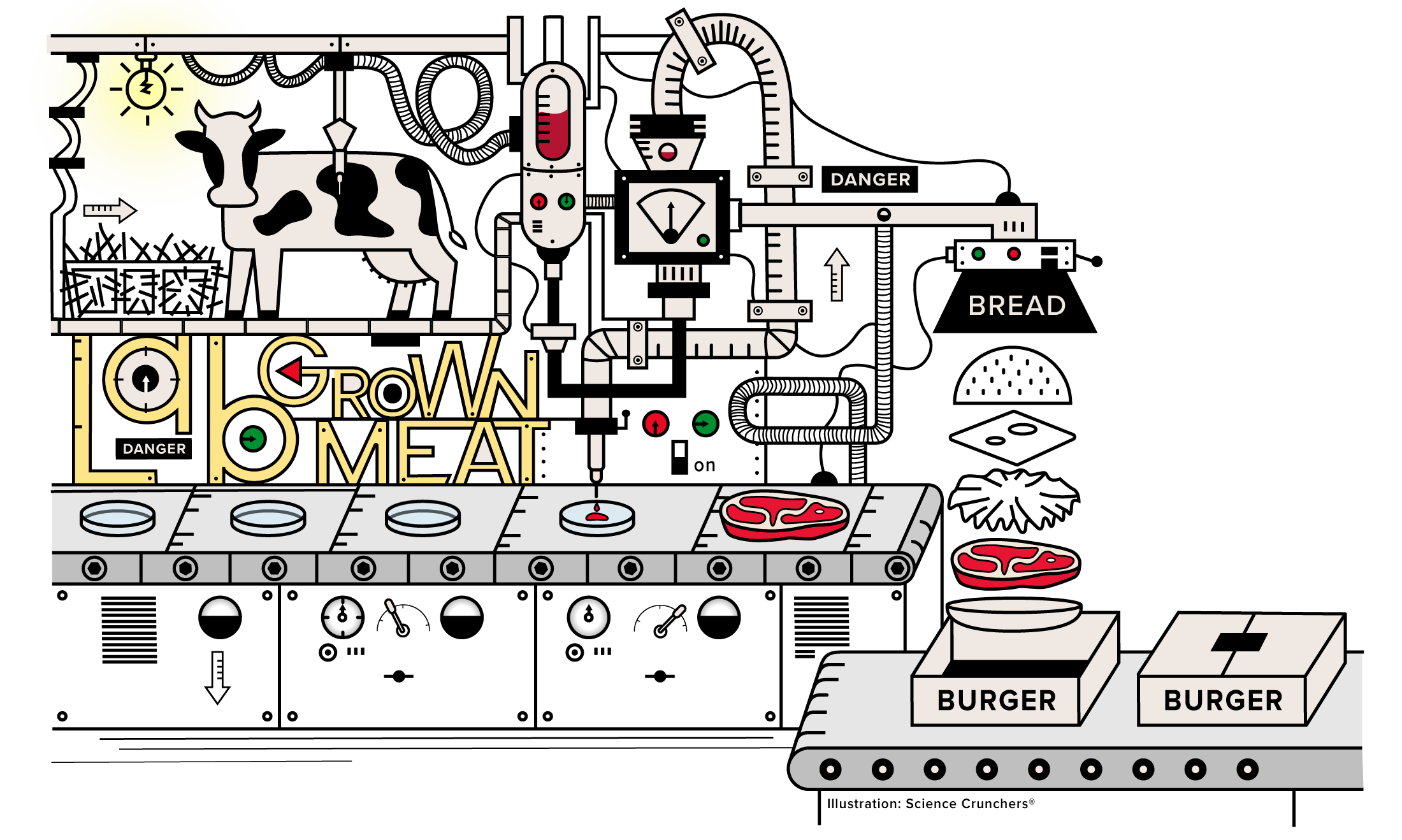 According to the Food and Agriculture Organization of the United Nations, by 2050, we will need to produce 70% more food to sustain the demands of a growing population. Cultured meat might be an answer.

According to the Food and Agriculture Organization of the United Nations, by 2050, we will need to produce 70% more food to sustain the demands of a growing population. Cultured meat (also called in vitro, artificial or lab-grown meat) might be an answer.

Nowadays, a significant portion of livestock is raised within the factory farming model. Regardless of the lower contribution to greenhouse gases and water usage comparing to extensive agriculture, the model is primarily focused on efficiency (i.e., quantities) rather than on its impacts such as climate change, interaction with the environment, less use of antibiotics, animal well-being or sustainability. Therefore, more efficient ways of protein production are being developed to sustain the growing global population while complying with today’s challenges, such as environmental and animal welfare issues.

The production of cultured meat aims to recreate the complex structure of livestock muscles with a few cells. A piece of muscle is cut from the animal to liberate steam cells – cells with the ability to proliferate but can also transform themselves into other types of cells, such as muscle cells and fat cells. Technically, research is still required to improve cell culture methodology. It is also almost impossible to reproduce the diversity of meats derived from different species, breeds and cuts.

Some researchers claim that cultured meat is safer than conventional meat since it is produced in an environment fully controlled by producers. Cultured muscle cells have reduced changes to encounter intestinal pathogens such as E. coli, Salmonella or Campylobacter. However, with a high level of cell multiplication, some dysregulation is likely to happen, as occurs in cancer cells.
Environmentally, the potential advantages of cultured meat for reducing greenhouse gas emissions are a matter of controversy. Regarding land, cultured meat will need less land than conventional meat production, based mainly on pasture. Nevertheless, this does not equate to an advantage for cultured meat. Indeed, livestock plays a crucial role in maintaining soil carbon content and soil fertility, since its manure is a source of organic matter, nitrogen, and phosphorus. More criteria need to be considered for a comparison between meat productions.

How consumers perceive and accept or reject cultured meat is mostly a matter of controversy. Initial reactions were feelings of disgust and perceived unnaturalness, but benefits were acknowledged. The deeper concerns were related to controllability, regulation and labelling and consumers tend to reject the name “in vitro meat” firmly. Still, consumers’ vision of cultured meat is likely to change over time as more information becomes available.

Cultured meat is still far away from the real muscle, which is made up of organized fibers, nerves, connective tissue, blood vessels and fat cells. Currently, research on cultured meat has a limited scope, but the product will evolve continuously to optimize the production, quality and efficiency of cell division. It remains to be seen whether this progress will be enough to be competitive against other solutions, such as plant-based alternatives.

DROP US A LINE

This site uses cookies. By continuing to browse the site, you are agreeing to our use of cookies.

We may request cookies to be set on your device. We use cookies to let us know when you visit our websites, how you interact with us, to enrich your user experience, and to customize your relationship with our website.

Click on the different category headings to find out more. You can also change some of your preferences. Note that blocking some types of cookies may impact your experience on our websites and the services we are able to offer.

These cookies are strictly necessary to provide you with services available through our website and to use some of its features.

Because these cookies are strictly necessary to deliver the website, refusing them will have impact how our site functions. You always can block or delete cookies by changing your browser settings and force blocking all cookies on this website. But this will always prompt you to accept/refuse cookies when revisiting our site.

We fully respect if you want to refuse cookies but to avoid asking you again and again kindly allow us to store a cookie for that. You are free to opt out any time or opt in for other cookies to get a better experience. If you refuse cookies we will remove all set cookies in our domain.

We provide you with a list of stored cookies on your computer in our domain so you can check what we stored. Due to security reasons we are not able to show or modify cookies from other domains. You can check these in your browser security settings.

These cookies collect information that is used either in aggregate form to help us understand how our website is being used or how effective our marketing campaigns are, or to help us customize our website and application for you in order to enhance your experience.

If you do not want that we track your visit to our site you can disable tracking in your browser here:

We also use different external services like Google Webfonts, Google Maps, and external Video providers. Since these providers may collect personal data like your IP address we allow you to block them here. Please be aware that this might heavily reduce the functionality and appearance of our site. Changes will take effect once you reload the page.

The following cookies are also needed - You can choose if you want to allow them: